I would maintain that thanks are the highest form of thought, and that gratitude is happiness doubled by wonder. —G. K. Chesterton 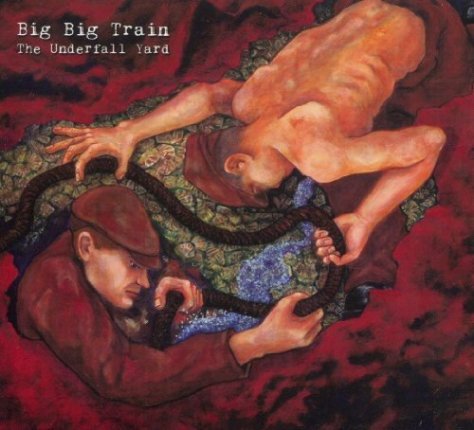 I first came to Big Big Train in 2010 through their generous offerings on http://www.bigbigtrain.com. Back then, they gave away downloads of most of the songs on The Difference Machine and The Underfall Yard. Their marketing technique worked – I was soon ordering hard copies of every BBT album I could find. I continue to buy, music unheard, any new release of theirs, and English Electric, Folklore, Grimspound, and The Second Brightest Star have provided hours of listening delight.

However, if forced to pick one BBT album to take with me to a desert island, I would not hesitate to choose The Underfall Yard. This is the first album to feature David Longdon, and his contributions raise the album to an entirely new level. Even though the liner notes list only Greg Spawton, Andy Poole, and David Longdon as members of Big Big Train, future members Nick D’Virgilio and Dave Gregory are integral players on every song. Add in Francis Dunnery (It Bites) and Jem Godfrey (Frost*), and you have an ensemble that is unmatched in contemporary prog.

That said, even the finest musicians are only as good as the songs they perform, and song-for-song, The Underfall Yard is the most consistently satisfying set they have ever recorded. Containing only six tracks, with times varying from around 5 minutes to almost 23 minutes, every note in this album is perfect. It is not a collection of six songs, but rather a suite of six movements, with a common theme of gratitude and wonder weaving in and out and through the music.

It begins with Evening Star and wordless vocal harmonies that suggest The Beatles’ Sun King. Guitar, mellotron, flute, brass, and glockenspiel enter to state musical themes that will appear throughout the rest of the album. It is an overture for what is to come.

Master James of St. George is a succinct celebration of the medieval castle designer and builder. Featuring vocal harmonies that would make Thomas Tallis proud, this song is the first of several to express admiration and gratitude for persons whose labors were responsible for making England the unique and wonderful country it is. On another level, it is about Greg Spawton’s relationship with his father, who passed away two years before The Underfall Yard was released. This song begins on an understated note that builds inexorably on Nick D’Virgilio’s percussion to a powerful conclusion. Along the way, we are treated to Dave Gregory, Greg Spawton, and Francis Dunnery outdoing each other in lyrical guitar solos.

Victorian Brickwork is central to the album, both in its track placement and its content. Another song written by Spawton in honor of his father, it features one of the most beautiful musical motifs of any Big Big Train song ever: the section with the lyrics, “Lost in low light and ocean tides/The love you never meant to hide.” As the song develops, David Longdon’s genius for emotional expressiveness shines. He manages to convey competing tenderness and gruff stoicism in the space of just a few lines. The tenderness wins, as the song winds down near the 8:30 mark after a brilliant instrumental workout. Just as things go silent, a lone trumpet picks up the “Lost in low light” theme again, and it is soon joined by a full brass band and choir as they perform a respectful elegy for Spawton’s father and other men of his generation. It is an unforgettable and very emotional musical passage.

One of The Underfall Yard’s greatest strengths is the pacing of the songs. After Victorian Brickwork, a lighter atmosphere is provided with Last Train. It is another celebration of an unsung hero, a Mr. Delia, who was the dependable and uncomplaining stationmaster at a lonely rural railroad station. It was closed in 1935 – a mundane event that would have been completely forgotten, but through the magic of Big Big Train, it is elevated to a bittersweet celebration of all the men and women who have done their jobs well with no expectation of special recognition.

Winchester Diver is next, and it is a harrowing account of William Walker who, from 1906 – 1911, worked in pitch black water beneath Winchester Cathedral. He labored alone in a diving suit putting stone and cement in place to shore up the cathedral’s foundation. Because of his efforts, the cathedral was prevented from collapsing. Jim Trainer’s brilliant cover art (see graphic above) is based upon this song, portraying two men lying on the ground feeding Walker’s air hose to him through a hole in the floor. Big Big Train takes this small chapter in British history and turns it into an illustration of the two worlds we mortals inhabit – the material and the spiritual. As everyday people worship in the light and air of the cathedral, Walker toils in hellish conditions below. Some of my favorite lyrics are in this song:

“He hadn’t much of a story to tell.

Just how he stopped the walls from falling.

Making a stand, made solid ground.

The organ covers up the hammer falls.

But the water’s edge is closer than you think,

You can see it in his staring eyes, the dripping shell,

The lower parts of hell are just beneath you.”

Which brings us to the final and crowning achievement of The Underfall Yard: the title track. A 23 minute tour de force, this song picks up all the threads from the previous five and weaves them into a brilliant homage to the great engineers and laborers of Victorian England. Ostensibly about Isambard Kingdom Brunel and his efforts to lay rail lines throughout the British Isles, The Underfall Yard is a requiem for the Age of Reason and the tremendous advancement of civilisation that occurred during and immediately after the enlightenment. As Brunel and his fellow engineers use “available light” to survey the path of the railroad, they can “see far” – they are the visionaries to whom we owe so much of our modern world. Without them, we would have no liberating technologies such as automobiles, medicine, and telecommunications. Unfortunately, “those days are gone; their names are lost.”

The Underfall Yard is an exercise in a virtue rarely seen in rock music: gratitude. Gratitude for those who have gone before us and made great sacrifices. Most of rock music is about tearing down conventions and rebelling against boundaries. Big Big Train have a gentler and more humble aim: to pay tribute to the unsung heroes who make everyday miracles happen. Their celebration of people like William Walker, Mr. Delia, and Brunel encourages the listener to look at him or herself, and ask, “What have I done with my life to make others’ lives better?” Long after the music of most rock artists has been forgotten, Big Big Train’s will still be honored and enjoyed. They are the Isambard Kingdom Brunel of contemporary music: visionaries whose work will have a profound effect on generations to come.