Soviet Denim Smuggling – The History of Jeans Behind the Iron Curtain https://www.heddels.com/2014/09/soviet-denim-smuggling-history-jeans-behind-iron-curtain/

Our options have fallen into two categories: bad and worse.
— Read on reason.com/archives/2018/11/29/why-are-we-still-in-afghanistan

“Holy, holy, holy is the LORD of hosts; the whole earth is full of his glory!”

And the foundations of the thresholds shook at the voice of him who called, and the house was filled with smoke.’  (Isaiah 6:1-4)

Or, to put it another way (especially if you’re Martin Luther assembling his Deutsche Messe in the 1520s):

Reverent hearts, we hold the feast of the apostle Andrew in Christendom as the first in the [Church] Year not only because it falls near the season of Advent but also because Andrew was called first, before the other apostles, by the Lord Jesus. Even Durandus the bishop of Mende (13th century liturgist) , says, “The saints are to be honored by imitation, not adored, as honor them as gods. They are to be honored with love, not adored with servitude.”

Now history tells us how St. Andrew. together with his fellows conducted their new office. Right away they left their nets and followed the Lord Jesus. And again, right away they left the ship and their father and followed Him. To them, Jesus is now the most precious one on earth—according to His mind they learn, according to His words they teach, according to His will they live, according to His decree they suffer and die. When St. Andrew was threatened with the cross, he said joyfully, “If I feared the punishment of the cross, I would never have preached the mystery of the cross.” Then when he saw the cross, he spoke, “Hail, precious cross, you who were dedicated by the body of Christ; may He receive me through you, who redeemed me through you.” And when he was living after three days on the cross, his hearers wanted to take him down by force, but he said, “Ah, let God take care of it! Do not make the peace of the Gospel suspect by your unnecessary revolt against the government.” That was apostolic constancy and long-suffering! This is what it means to “leave everything and follow Christ,” all the way to the last catch of fish.

(Translated by Benjamin Mayes, from the Lutheran Treasury of Daily Prayer published by Concordia Publishing House in 2008.  Six parts of Herberger’s great Christ-centered devotional commentary, The Great Works of God, have been translated into English by Matthew Carver and published in three volumes; check them out here, here and here.)

Our options have fallen into two categories: bad and worse.
— Read on reason.com/archives/2018/11/29/why-are-we-still-in-afghanistan

Hello Readers of Spirit of Cecilia, believe it or not, I’m going to be self-promotional (shock, horror!).  The publisher of my biographies of J.R.R. Tolkien and Charles Carroll of Carrollton, ISI Books, is currently offering each for 1/2 price.  How great is that?  Now, you can have your Shire and your Philadelphia!

Just imagine.  Rather than a quote or a snippy comment, you actually get me at my thoughtful best (well, thoughtful most).

I doubt if I’ll ever forget the first time I encountered The Tangent’s The Music That Died Aloneback in 2003.  I came to them because of a notice that Roine Stolt was a part of it.  At that point, I had not heard of Andy Tillison.  From the moment I first encountered Tillison, though, I thought he was incapable of a misstep.  If anything, I thought way too highly of him (that is, way too highly of any person. While I didn’t think he could walk on water, I had him rather close to being able to do so.  Over the last fifteen years, I have explored every aspect of Tillison’s music—from The Tangent to his PO90 work to his various solo projects.  I even had the privilege of spending several days with Andy and his beautiful and brilliant significant other, Sally.

But, back to The Music That Died Alone. That album, to this day, remains a masterpiece.  The way that Tillison combined and fused the old and the new amazed me to no end, and it continues to do so.  I can put that CD in the tray and enjoy it after God only knows how many listens. Each time I hear it, I hear something new and fresh. It would not be an exaggeration to state that it has been the soundtrack of my life over one and one half decades.

And, I have felt the same about several other The Tangent albums, but, in particular, Down and Out in Paris and London, Not as Good as the Book(I own two copies—one never opened, simply to protect the book that comes with it), and, most especially, Le Sacre du Travail.  This last will always be an all-time favorite. If someone forced me to name my top albums of all time, it would certainly be in the top 10 and, very likely, the top 5. I know of no other rock artist—past or present—capable offering social criticism better than does Tillison.  At his best, he is sublimely Chestertonian in his art.

This afternoon, my copy of Proxy, the most relent The Tangent album, arrived.  Amen.  I’d heard a promo copy, but this is the first time I’ve been able to listen to the album in all of its glory. And, it is rather glorious, especially musically.

The opening track, “Proxy,” tells a rather sordid tale of international diplomacy and manipulations in six parts.

The only way to describe track two, “The Melting Andalusian Skies,” is classy.  The song sounds like something that could’ve been played in a nice nightclub, circa 1947. The war is over, and we, the listeners, want to find the good in what remains.

“A Case of Misplaced Optimism,” is really, really funky. This one might grow on me, but, at the moment, it somewhat eludes my understanding and my sympathy.

Another six-part song, “The Adulthood Lie,” is the highpoint of this album. Avoiding the political rants of the opening track to the album, “The Adulthood Lie” is Tillison at his socially critical best. Indeed, when it comes to writing lyrics about cultural problems and ideas, no one in the current world of music does better, as noted above.

The final proper track of the album is a re-write and re-release of the 2013 song, “Supper’s Off,” a criticism of those rock fans of the 1970s who became corporate bosses and lawyers. I’m curious to know why Tillison decided to remake this song.  The version from 2013—much leaner than this one—was perfect as is. This 2018 version is certainly fine, but it lacks the raw energy of the original.

The final (bonus) track of the album is a excerpt from Tillison’s last solo album, recorded under the name of “Kalman Filter.” That album, Exo-Oceans, is excellent, but I’m not quite sure what it’s doing as a bonus here. A bit of marketing by an artist who hates marketing?

Tillison has become overly-political in his lyrics over the last two albums. On his last album, he claimed that those who believed in Brexit were Nazi-Hitler sympathizers. Not being British, I guess I don’t understand the issue well. In interviews, Tillison has described himself as an anarchist. I would presume that an anarchist would favor the breakup of large political entities such as the EU.

Maybe anarchism has a different meaning in England than it does here in the States?

Proxy, though, avoids the political rants of the previous album. Not surprisingly, as such, it’s much better. Let’s hope Tillison finds his way out of the political world and fully back into the world of art and social criticism.

My fifth to last lecture for the Fall 2018 course, Western Heritage.  A look at the changes wrought by Copernicus, Galileo, and Newton. So long Aristotle and Ptolemy!

The title for the lecture comes from the book of the same name by C.S. Lewis.

“The history of mankind is the history of ideas. For it is ideas, theories and doctrines that guide human action, determine the ultimate ends men aim at, and the choice of the means employed for the attainment of these ends. The sensational events which stir the emotions and catch the interest of superficial observers are merely the consummation of ideological changes. There are no such things as abrupt sweeping transformations of human affairs. What is called, in rather misleading terms, a “turning point in history” is the coming on the scene of forces which were already for a long time at work behind the scene. New ideologies, which had already long since superseded the old ones, throw off their last veil and even the dullest people become aware of the changes which they did not notice before.” – Ludwig von Mises 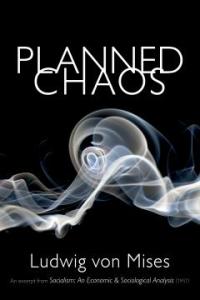