It seemed on one hand to be so familiar … and on the other hand, so new.  Launching astronauts into orbit?  Been there, done that.  Launching a new type of capsule-type 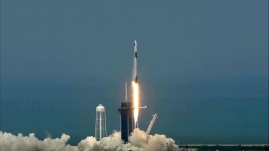 spacecraft into orbit?  Started doing that in 1961.  Two astronauts in a spacecraft?  Gemini 4, with two astronauts, took off from the Cape in 1965.  Launching astronauts into orbit from Pad 39A of Cape Canaveral?  Many times starting in the 1960’s … including the most famous liftoff of all time.  And despite all that … it was all so new.

It was new in large part because of who was doing it.  SpaceX is not a traditional NASA contractor.  The Falcon 9 rocket which pushed Bob Behnken and Doug Hurley into orbit today was developed almost entirely with private funding, and without any guarantee of a NASA contract for services rendered.  It was the same for the Dragon spacecraft that flew atop the Falcon 9.  The propulsive-landing first stage was also developed by SpaceX.  Thus, in another first, the successful landing of the Falcon 9 first stage marked the first human spaceflight in which the booster stage was propulsively landed, with the possibility of use again in the future.

The Dragon spacecraft itself was something that is sleek, new, and modern, even for the Space Age.  Replacing a dizzying array of switches, buttons, knobs, and analog gauges were an array of touchscreens, neat, clean, and orderly.  The tour of the Dragon given to us by the astronauts earlier this evening showed a spacecraft that is much roomier than the Apollo command module could ever hope to be.  And the entirety of the assembly that roared off Pad 39A was smoother than any crewed launch vehicle to date.

But more than that, this just felt different.  For a mission that was, on one hand, not much more than a simple mission of sending astronauts to the International Space Station, it attracted an inordinate amount of attention.  This might not have been like watching Apollo 11 leave for the moon, but it did seem to garner the same level of interest present when John Young and Robert Crippen took the space shuttle Columbia on its maiden flight in 1981.  There are reasons – transcendental ones – that go well beyond the historic nature of a private company developing and successfully launching a rocket and crewed spacecraft, largely independent of any governmental space agency, that made this mission different.

Elon Musk and SpaceX have made space cool.  Sure, there was a lot of interest in the topic when I was a kid, growing up during and later, in the wake of the Apollo moon landings.  Back then, space was seen as the proper province of government programs and not private entrepreneurs.  And kids like me that were interested in it, well, we were kind of the nerdy ones.  Then public interest faded for decades, with only us die-hards maintaining any real interest in the goings-on off-planet.  Nowadays, Musk’s tireless advocacy for truly opening up the final frontier – backed by his actions in founding SpaceX and leading it to and through days like this – is having a cultural impact that could go far beyond that of Apollo.  Culturally, the impact of that program began fading when Armstrong and Aldrin left the moon on that glorious July day in 1969.  It fell straight off a cliff when Eugene Cernan and Harrison Schmitt left the moon for what was (at least for now) the final time in December 1972, relegating Apollo to museums and history books.

Instead, Musk has got people talking about space.  Not just tech geeks, but average people with no particular reason to be interested in the topic.  My wife, for one, received a text message from another housewife friend today letting her know that the launch was imminent.  That came from a source I would not have expected, which made it’s arrival all the more satisfying.

Moreover, through the heavy lifting (pardon the pun) that Musk and SpaceX are doing, people can now actually talk about sending humans to Mars and living there 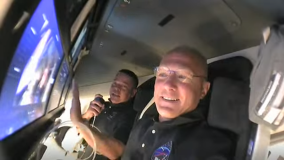 permanently without the snickering and eye rolls of what not too long ago was considered pie-in-the-sky naivety.  When a guy says he wants to send people to Mars and then founds his own rocket company that designs and builds rockets and crewed spacecraft and actually sends them into space, you can no longer brush it off with snide remarks.  When he crushes launch costs and leaves former industry heavyweights like Boeing and Lockheed in the dust, it’s time to stop laughing.  At that point, it’s time to stand up and take notice.

In that vein, one of the most satisfying phenomena I observed today was something that occurred multiple times on Facebook.  Pictures, posted in various groups and pages, by proud parents of their young children, dressed up in homemade space suits, manning the controls of their makeshift spacecraft, waiting for this real-world launch to undoubtedly be followed by their own (for now) imaginary journeys into space.  One little girl even used an iPad for an instrument panel, which was particularly fitting given the description above of the Dragon spacecraft.

You’ll have a hard time convincing most parents that their kids taking such an interest in opening the final frontier is a bad thing, especially given all of the focused study and knowledge that one needs to attain to get there.  Thanks to Musk and his brilliant employees at SpaceX, these kids – unlike the generation of Apollo – may actually get to see the final frontier truly opened, the door kicked in never to be closed again.  These kids, thanks to happenings like the one today, have a real chance of making their dreams into a permanent reality.