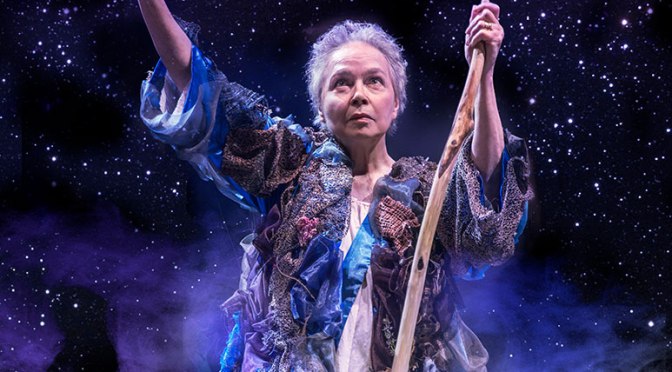 The next Shakespeare@Stratford film to hit YouTube is the Festival’s 2018 production of The Tempest, premiering on Thursday, May 14 and running for three weeks.  Here’s my review from when my wife and I saw the play live in October of that year.

This is the third production of The Tempest we’ve seen at Stratford, Ontario; since we started attending in 2004, the Festival has usually marketed the play as a chance to catch an actor of high skill and reputation (and often getting on in years) in the role of Prospero. 2005’s Tempest served as a grand farewell for William Hutt, the most accomplished classical actor in Canada’s theatrical history; the 2010 production was built on Christopher Plummer returning to the scene of his earliest triumphs. This time around, the hook was seeing Martha Henry (since Hutt’s passing, the current Greatest Living Canadian Actor) playing the exiled magician — part of a season with multiple productions (a gender-swapped Julius Caesar and a gender-fluid Comedy of Errors, along with the drag-rock musical The Rocky Horror Show) trendily exploring postmodern conceptions of freedom.

But any dreams or fears of a transgressive Tempest faded quickly; Henry forthrightly played Prospero as female — duchess of Milan, mother of Miranda, wizard ruler of an uncharted, enchanted island — with a few modest tweaks of the script not even scuffing the verse rhythms, and that was that. (After all, it’s a fairy tale; if you’re worried about the lines of descent for Renaissance Italian nobility being messed up, you’ve come to the wrong play.) Even better, this was an ensemble Tempest, with Henry clearly featured, but also clearly first among equals. Rather than chewing scenery a la Plummer or waxing grandiloquent like Hutt, she drove the plot without swallowing the stage, working to provide for her daughter, bring those who exiled her to book, reward virtue and punish wrong with formidable focus, aplomb and dry humor. And all the while, she genuinely wrestled with conflicting impulses: would she take vengeance on her adversaries, or show them mercy? It’s a tribute to Henry’s and director Antoni Cimolino’s conception that, even if you knew the play, the answer wasn’t telegraphed.

The strong cast also elevated this production, consistently playing off Henry’s indispensable work while fruitfully developing their own characters. Andre Morin’s Ariel did Prospero’s bidding with delight, while holding her to the promise of eventual freedom; Michael Blake’s Caliban chafed convincingly under her authoritarian rule. For once, the shipwrecked mariners were three-dimensional characters, not plot tokens — the King of Naples Alonso (David Collins) ripely autocratic, Prospero’s usurping brother Antonio (Graham Abbey) convincingly sociopathic, counselor Gonzalo (Rod Beattie) more of a sage and less of a fool than usual. Tom McCamus as butler Stephano and Stephen Ouimette as jester Trinculo clowned to perfection, nailing every laugh possible whether on their own, with Caliban or with the ensemble. The young lovers were the most pleasant surprise; Ferdinand and Miranda can feel like weak sauce in the wrong hands, but Sebastien Heins & Mamie Zwettler were spunky, passionate, intelligent, fully cognizant of their developing affections — strong & spot-on.

And yes, the special effects and pageantry (serious creature puppetry by the ensemble of Spirits & Monsters at key moments, Festival stalwarts Chick Reid and Lucy Peacock regally presiding over Act Four’s celebratory wedding masque) were impressive as always. But Stratford productions go deepest when they cut to the heart — and this Tempest showed us, beyond its numerous charms and delights, the depth of Prospero’s sacrifice. To become truly great as well as truly free, the exiled ruler must serve her enemies as well as her friends — forgiving wrongs, securing Naples and Milan’s future through Ferdinand and Miranda’s marriage, releasing the spirits of the island, and abjuring her “rough magic.” Martha Henry’s reading of Shakespeare’s Epilogue – bereft but relieved, slyly humorous in its appeal to the audience for final release through prayer and applause – communicated both the cost of Prospero’s renunciations, and their true worth. It was a lovely end to the best, most bracing production of The Tempest we’ve seen at the Festival.

Watch the premiere of The Tempest on the Stratford Festival’s YouTube channel tomorrow at 7 pm EDT; a pre-show chat with Martha Henry, Mamie Zwettler and Antoni Cimilono starts at 6:30 pm.