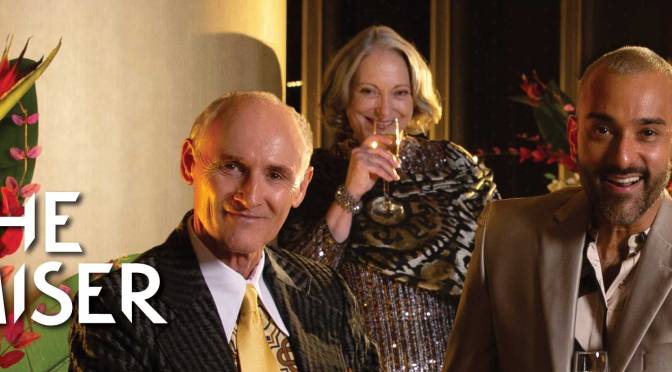 Harpagon, the title character of Molière’s The Miser, is a flat-out fool. Money — getting it, keeping it, hoarding it — is his obsession; in the presence of his stash, he kneels in abject devotion. But he also projects that obsession onto everyone else in his life. He berates his adult son and daughter for their “spendthrift” ways; he lends cash only at exorbitant rates (with outrageous stipulations in the small print); his fear of both having his treasure with him and letting it out of his sight easily slides into wholesale paranoia that everyone is out to part him from it.

The thing is, Harpagon isn’t completely wrong; his single-mindedness warps how everyone in his life approaches him. Both his children hesitate to reveal their new loves to him, for fear he’ll deny access to their trust funds. His household servants (including his son’s shady buddy and his daughter’s lover) suck up to him and diss their colleagues to his face, bitching behind his back and battling for dominance all the while. The local matchmaker (who Harpagon has tasked with finding him a new, young wife) and moneylender butter him up outrageously, hoping against hope to profit from their flattery. Even the ingenue both Harpagon and his son are after wants the miser’s money — to provide for her ill mother’s medical care, but still! The farcical complications of the play flow naturally and wittily from this set-up; in the company of a master fool who has what they desire, everyone’s foolishness will out.

Where the Stratford Festival’s new production of The Miser is faithful to that core revelation of Molière’s wry fable, it sparkles with a sneaky glee — even through two layers of adaptation (Ranjit Bolt’s Anglicized translation of 2001, further updated to contemporary Canada by director Antoni Cimolino). Guarding not only his briefcase full of Canadian $100s, but every absurd knick-knack in his Victorian horror of a house, Colm Feore’s Harper is the blazing star of this show; his alternating mania about Mammon and cluelessness about everything else send everyone around him into their own eccentric orbits. The household servants — ne’er do well Fletcher (a phlegmatic, sly Emilio Vieira), butler/secret lover Victor (Jamie Mac, confident and bewildered in turn), and chef/chauffeur Jack (Ron Kennell in full clowning mode) — alternately brazen their way through Harper’s whims and unleash their frustrations on each other; matchmaker Fay (Festival stalwart Lucy Peacock, in what amounts to a well-deserved star cameo) puts on a show of managerial competence for everyone else while gingerly fumbling with Harper like he’s about to explode; love interest Marianne (an empathetic, determined Beck Lloyd) stands up for herself and her mother appealingly, even as Harper and his son Charlie scrap over her like kids on a playground.

The characterizations of Charlie and Harper’s daughter Eleanor were what struck me as the weakest part of this production. While Qasim Khan and Alexandra Lainfiesta hit the right notes of frustration and futility (aided by the campy thrift-store chic of their costuming), their amped-up desperation comes across as shrill and brittle. The struggle between a serenely ignorant father and his deprived yet somehow spoiled children — the heart of the play’s satire — is where Cimilono least trusts Molière to connect. Instead, he crams gratituous Boomer vs. Millenial references into both the program notes and the script, saddling Charlie with a petty consumerist materialism and Eleanor with a string of cliche “woke yet broke” slogans. It has to be said that Khan and Lainfiesta sell this material with all their considerable ability; but for me, the insistence on painfully present-tense content is what keeps a funny production from crossing over into the hysteria that Molière generates when played with trust. There are plenty of simmering chuckles and outright hoots here, but not as many unstoppable guffaws as I had hoped for.

That said, this production of The Miser (complete with an over-the-top fairy-tale ending that does retain its hilarious impact through the layers of updating, as David Collins’ wonderfully deadpan Sir Arthur Edgerton sticks the landing) had the Festival Theatre audience in stitches, attested by the generous, heartfelt ovation for Feore and his supporting cast. If you can peer through the alternately opaque and overripe references to “the next Bezos” and “the land of Tim’s” (oh, and Harper’s distrust of safes — they attract the FBI as well as burglars!), you may well find yourself reflected in Molière’s unflattering yet strangely revealing mirror.

The Miser is currently in previews at the Stratford Festival Theatre. It officially opens on August 26th, playing through October 29th. Tickets are available at stratfordfestival.ca.

4 thoughts on “Stratford Festival Preview: The Miser by Molière”