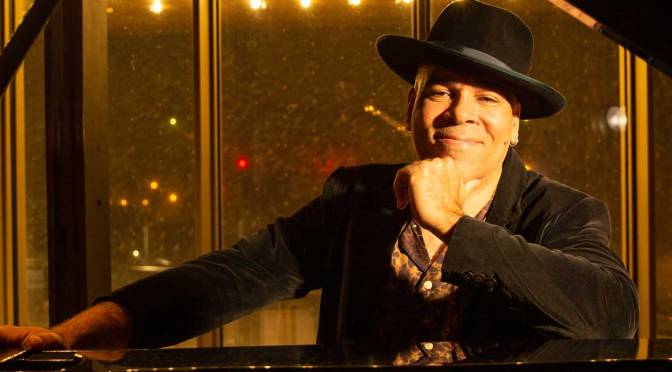 In last year’s cut-down Stratford Festival lineup, actor/musician/playwright Beau Dixon’s Freedom Cabaret (part of the Festival’s Forum of other performing arts and speakers) garnered some of the strongest reviews. Walking out of yesterday’s performance of Freedom Cabaret 2.0, I completely understood why.

Subtitled “How Black Music Shaped the Dream of America”, this year’s cabaret is loosely structured around the life of work and Martin Luther King, Jr. Dixon’s command of the black musical tradition is formidable and thrillingly eclectic; grasping the connections between decades and genres with a firm hand, his new set comfortably mingles jazz, soul, folk, gospel and even a touch of hip-hop in an arc that illuminates both King’s journey and the idealism he set loose during the era of the Civil Rights Movement.

And the ensemble that Dixon has reconstituted for this year — serving as the lynchpin on piano and vocals for a trio of singers with rhythm section — grasps those connections at the same level, vividly painting a compelling portrait of King’s context, life, death and legacy. Shakura Dickson’s floating soprano and Alana Bridgewater’s earthy alto scale the gospel heights of “Oh, Happy Day” and “Move On Up A Little Higher”, then pull back for an eerie, hovering “Strange Fruit” and Nina Simone’s wrenching “Four Women”; Aadin Church runs the emotional and vocal gamut from soaring tenor to down-home baritone on showcases like Louis Armstrong’s “(What Did I Do to Be So) Black and Blue”. Rohan Staton on guitar, Roger Williams on bass and Joe Bowden on drums lay down one irresistible groove after another, slipping serenely from a Jeff Beck quote in “People Get Ready” to the abstracted jazz of “Freedom Day”. And Dixon ties it all together with his supple piano, his power-packed voice and his understated yet emotional narration.

Most fascinating to me were the artists Dixon chose to anchor King’s story. Stevie Wonder’s “Love’s in Need of Love Today” and “Living for the City” bookended the narrative, melding harmonic sophistication with unaffected idealism; the Staples Singers “Why? (Am I Treated So Bad)”, “Freedom Highway” and “Respect Yourself” embodied both the lament of the oppressed and the spiritual grit to stand up against that oppression. But the searing quartet of pieces by chanteuse Nina Simone provided the real key to unlock the heart of King’s message. From unflinching confrontation with racism’s deepest horrors in “Mississippi Goddamn” (operatic in structure, visceral in its impact) through the heartbroken elegy for the fallen leader “Why? (The King of Love Is Dead)” pivoting to the visionary hope of “To Be Young, Gifted and Black”, Simone’s music is brutally honest and unsparing — but it also incarnates how King’s dream of hatred conquered by love was set loose in the 1960s and how its ramifications have been rippling out ever since.

The dream and its spread — even after the horrors of black history in the United States, even in the face of what obstacles remain following the progress of the Civil Rights era — are why Dixon and his ensemble can finish Freedom Cabaret with a hearty invitation for the Festival audience to join the “Love Train” that King set in motion. If you can, I highly recommend you catch it.

Freedom Cabaret 2.0: How Black Music Shaped the Dream of America runs through August 28th at the Tom Patterson Theatre’s Lazaridis Hall in Stratford, Ontario. Tickets are available at stratfordfestival.ca.