Stephen Babb is best known as coleader, bassist, singer, and songwriter for venerable prog-rockers Glass Hammer. Now he can add “accomplished fantasy author” to his resume. He has just published Book One of a projected trilogy featuring the character Skallagrim, who also features in the two most recent Glass Hammer albums, Dreaming City and Into the Breach.

Let me say right off the bat how impressed I am with Babb’s writing ability. From the very first word, he takes the reader on a rollercoaster of a ride through a fully fleshed out world that includes demons, sorcerers, assassins, hideous Lovecraftian creatures, beautiful nymphs, and monstrous ghouls.

While the plot loosely follows the one outlined in Dreaming City, Skallagrim In The Vales of Pagarna is full of surprising twists and turns. Skallagrim himself is a very likeable and endearing character who endures tremendous trials and hardships on his quest to rescue a beautiful young woman he sees for just a moment before she is taken captive by an evil sorcerer. I won’t say anything more than that regarding the plot, because I don’t want share any spoilers. However, even if you’re familiar with Dreaming City, you will still be surprised with how this story concludes. 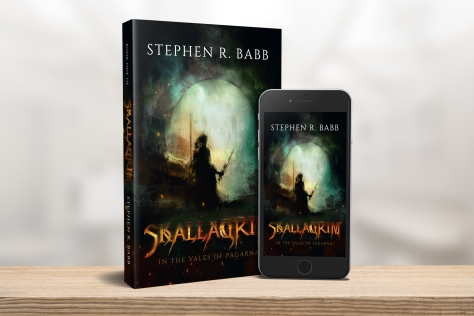 The underlying theme of the story is how Skallagrim, a lowly thief who suffers from amnesia, matures both emotionally and spiritually. In that sense, In The Vales of Pagarna is a modern-day Pilgrim’s Progress, albeit quite a bit bloodier! The obvious comparisons are to Tolkien and Lewis, but Babb has managed to come up with an original mix that includes the aforementioned H. P. Lovecraft and a bit of Moorcock. Like Tolkien’s The Lord of the Rings, Christianity provides the framework for Babb’s fictional world, but it is never explicitly referenced. There are several episodes where Skallagrim is “surprised by joy” as C. S. Lewis would say.

Fans of Glass Hammer will rejoice to learn that the story from their The Inconsolable Secret album is deftly integrated into this new saga, and there are several “Easter eggs” sprinkled throughout. GH has long been a favorite musical artist of mine; now I have a favorite fantasy author as well!