Spring poses interesting opportunities, especially if you can manage to ride up to the mountains. Not every day you motorcycle through icy roads on a bright day, at near zero temperatures, and with a backdrop of snow covered mountains! Not to mention the occasional water stream, gently crossing the freeway, and a highway shoulder precariously stacked with freshly removed snow – guess this is why they call motorcycling as sensory overload? As usual, the fuel tank was also sort of running low; the two gallon tank has been a bit difficult to handle, especially when you go exploring. But, like every other time, when it was close to being empty, providence manifested in the form of a Shell gas station.

Group riding on this motorcycle is going to be a tad annoying, for others! You definitely don’t want to ride with someone who is constantly on the lookout for a gas station. In that sense, groups do pose different trade-offs. We all prefer different riding patterns, different frequency for stops, speeds, routes etc. But group cohesion mandates uniformity; unless you really enjoy the company this uniformity can be stifling.

Not just in motorcycling, in general we all have different and often contradicting preferences and views. So, unless there is a commonly enforced code, large groups of people will not easily get along. And unless this conformity is overall in sync with our own preferences, we are simply not going to join and remain being part of such a group .

Actually large scale intellectual agreements are also rare. More you think, more your mind diverges from the median. And more the intellectual compromises you need to make to just fit in. If you have strong convictions, such compromises might seem daunting. Hayek famously said “largest group of people whose values are very similar are the people with low standards”. In that sense, joining Hells Angels or some political party is not so different. Both signify low standards, the end of serious thought and reflection, but may be in slightly different ways. 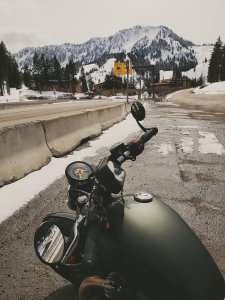