As some of you might very well know, today is International Talk Talk Day.  Sometime in 1987 or 1988—the memory fades—Kevin McCormick and I vowed that every April 5th, we would listen to the entirety of Talk Talk’s mid-period masterpiece, The Colour of Spring, as a reminder of three things.

First, that no matter how dark the world might become, beauty endures and promises—through the seasons—eternal renewal.

Second, that no matter where we are in the world, our friendship endures.

Third, that Mark Hollis (RIP) was a genius.

Since the late 1980s, Tad Wert has joined in the pledge.  Please join us in celebrating that miracle that was Talk Talk.

To get a copy of The Colour of Spring, go here: https://burningshed.com/talk-talk_the-colour-of-spring_cd?filter_name=talk%20talk&filter_sub_category=true

Well, birthdays all around!

On November 22, the website turns one. How great is this? Too great, to be sure.

And, of course, expect great pieces from Tad, Erik, Mahesh, Richard, and Alex and others! All to the good. 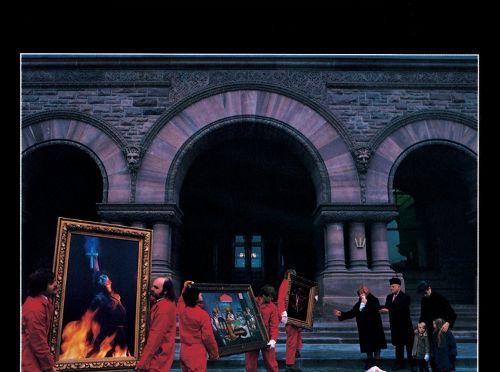 [A slightly different version from the one that appeared at The American Conservative. With thanks to TAC and all concerned.–BB]

Sometime just prior to spring break, March 1981, I sat at one of the old wooden tables in Liberty Junior High, in Hutchinson, Kansas.  The building no longer exists, having been destroyed that same year to make way for Liberty Middle School. The old building had charm, even in its dilapidation, while the updated one, not surprisingly, reeks of prison. What happened to those lovingly carved, tagged, and scarred tables at which I once sat, read, scrawled, and thought, I have no idea. They either sold at auction or met the same fate as the scarily swaying staircases. In the end, the bulldozer comes for us all.

One particular March day in 1981, though, means something quite special to me. Being in detention for some reason that now eludes me (though, I was probably in for having talked too much in class; I never did get good conduct grades), I sat with my fellow detainees and friends, Troy S. and Brad (yes, same first time) L. I had gone to early grade school with each of them at Wiley Elementary, reuniting in junior high after three years apart while I attended Holy cross Catholic school, grades four through six. Since we’d last seen each other in third grade, our music tastes had changed rather considerably, and I started pontificating about the brilliance of Genesis’s 1980 album, Duke. Troy and Brad were into harder music, and they asked me if I’d ever listened to a Canadian band called Rush?  I hadn’t, I admitted, intrigued.  Having two older brothers, I knew Jethro Tull, Yes, and Genesis quite well, but neither of them had ever embraced anything harder than Kansas.  After Troy and Brad gushed about the band, I rode my bike to the local record store immediately following school that day and purchased Rush’s latest album, Moving Pictures.

To write that the album changed my life would be nothing less than a trite understatement. It radically altered my understanding of the world, not only by its words, but, especially, by its example. To this day, I can remember the smell of that album sleeve, glossy, thick, and oily, quite different from the cheap paper-thin sleeves prevalent among so many commercial albums. With three kinetic photos of the band members on the right side of the sleeve, white lettering giving credit on a black ground on the left side, and all of the lyrics on the alternate side of the sleeve, I devoured every word and image. Something profound spoke to my eager and open thirteen-year old mind.

Annals of the ages
preserved no evidence,
not a trace esconced
in the walls of titular tombs.

in her name,
carved into stone
of a sepluchre in the catacomb.

She lives,
enlivened by the virginal joy
not given over
to earthly ecstacy.

Hers, the empassioned embrace,
of the sacrificial body.

Hers, the voice
ringing out the sweet sounds
of certainty.

A life, emboldened to stand
firm in the face of gallows,
flourishes
and runs free
into welcoming elysian fields.

The haunting gaze of conviction
urges us to run abreast,
yet fixed souls stand in awe
of such simple,
wonderous,
radiance.

This, the heart of the saint.
This, the incantation of eternal love,
a wordless aria
soaring to heaven.

And so she is here,
as present as you and I
as we, in unearthly voices,
sound the passing knell

Faith and light and trembling
hope—you know the voice
sung out to angels,
the censorial sonance to the cold
hand of the rex legem

Condemned now,
the responding smile
opens the heart
to the flowing blood of truth.

There, the bejeweled
backdrop of guilded stones,
reveals the maiden betrothed,
not defiled.

and just below,
the angelic gaze,
a perfect alabaster nape
which twice and again
the henchman cleaved
but could not sever.

A final sign
of love revealed,
of three in one—
her love now sealed.

For six years, I was one of five folks who founded and ran a website dedicated to reviewing and promoting music.When we formed in October 2012, we originally wanted to be a fan site for the English (and now Anglo-American-Scandinavian) band, Big Big Train.  We broadened our reach almost immediately, attempting to review music of all forms.

We ended up having a blast, to be sure.

After six years, though, several of us thought it was time for a change.  That is, time to take us not just into music but into all of our cultural loves: music, art, poetry, fiction, history, biography, and film. Certainly, we could’ve done that with the old site, but that site had taken on a life of its own.  We wish them nothing but love and success!  We’re certainly not leaving music behind with the Spirit of Cecilia, but we are adding quite a bit to it. So, not just Big Big Train, but Big Big Train plus Margaret Atwood, T.S. Eliot, Willa Cather, Miles Davis, Leo Strauss, Philip Melanchthon, Sir Thomas More, Edmund Burke, Alfred Tennyson, J.R.R. Tolkien, Kevin J. Anderson, Christopher Nolan, and Alfred Hitchcock.

We threw around a number of titles for this website, knowing all along that our inspiration was St. Cecilia, the Roman Catholic (and Anglican) patroness of music and the arts. Traditionally, St. Cecilia is depicted as a young woman, holding and performing on some kind of instrument, with an angel or two watching over her. Though quite Catholic, such depictions are most likely Christianized updates of the muses inspiring a Mediterranean musician.

Kevin McCormick finally came up with the name, “Spirit of Cecilia,” and it stuck.  Indeed, more than just stick, it seems perfect for what we want to do.

And, this brings us to a second form of inspiration for the title–arguably the greatest album of any type of music of the last six to seven decades, SPIRIT OF EDEN by Talk Talk. With all due apologies (and praise for) to James Marsh, the cover artist, I did my best (and, sadly, my best is pathetic!) to create an icon something akin to the original 1988 cover to that album.

Well, as is natural for all human institutions and works, this website will evolve over time as well. No matter what, though, we promise to write our best, to think our best, and to give you. . . you guessed it. . . our best. Thanks for joining us.  We hope you enjoy the ride.